Are you getting a 2nd Stimulus check? 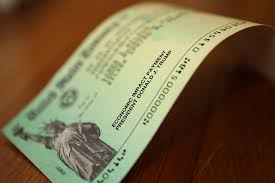 Most Americans have received their first Pandemic stimulus check by now.  These checks were sent out by April or May.  President Trump tweeted that there may be another wave of checks to come. The first round of checks was created under the CARES act. This act came with an array of benefits that included forgivable loans for small businesses through the Paycheck Protection Program (PPP) as well as tax credits for businesses that were able to retain employees, and stimulus money.  As I stated in a previous article, this incredible amount of money printing robs retirees of their hard-earned social security, pension, and other retirement sources through inflation.  If you are 70 or 80 years old today, you may have started working in the 1960s.  Inflation or money printing caused a gallon of gas to go from $.31 cents in 1960 to over $3.00 today.  The average annual income for a family in 1960 was $5,600, in 1970 it was $9,870, and in 1980 it was $12,513; today the national average is over 10 times the 1960 amount at $61,937 (2018 census data ).   This was largely due to the masses of money printing going on in the United States, 2 trillion dollars was “created” for the last stimulus and it appears the next COVID stimulus check will be closer to 3 trillion dollars.  This mass amount of money printing will make it even harder for seniors to live on the social security they earned when the average income may have only been $5,600 to $10,000 per year and now they have to pay today’s inflated prices for goods.

The Health and Economic Recovery Omnibus Emergency Solutions (HEROES Act) has already passed the House of Representatives and is set to go through the Senate for a vote.  If it passes, it is likely President Trump will sign the Act.   He was cited by his aides that he is “largely supportive of sending Americans another round of stimulus checks, expressing the belief that the payments will boost the economy”.  This would qualify families for up to $6,000 per household.  Individuals earning under $75,000 would get $1,200 and couples making under $150,000 could get $2,400.  Families would get up to $1,200 per dependent for up to 3 dependents.  The act is getting some push back in the senate because there is a provision that requires non-citizens living in our country to receive the same benefits as citizens.  Whether this bill is dead in the water or is able to be re-worked to get through the Senate will determine if there is another wave of money printing that would in one way or another affect us all.

UPDATE July 1st 2020: The US Senate will be on recess until July 20th. Senate Majority leader MitchMcConnell says they will take another look at a stimulus bill when they get back to work in July. He said, “The focus will be kids, jobs, and healthcare…Any bill that passes the Senate will have liability protections in it, this is liability protections for everyone…Unless you’re grossly negligent or intentionally engaged in misconduct, we’re going to see to it that you don’t get sued on top of everything else you’ve had to deal with in trying to get through this.”